But just how impressive is LinkedIn? Why should you be using LinkedIn? Here are some impressive statistics and figures that explain just how important LinkedIn is to the professional world.

LinkedIn is One of the World’s Fastest Growing Social Networks 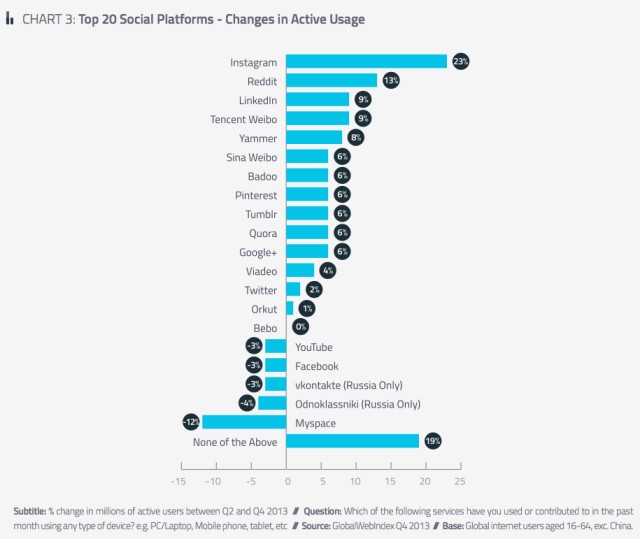 LinkedIn Users Are Way More Likely to Visit your Homepage

Whether you’re advertising your personal homepage or your company’s website, you’re better off focusing your marketing efforts on LinkedIn. When it comes to direct traffic to your website, LinkedIn is easily the number one social network. In fact, LinkedIn users are four times more likely to visit your website than Facebook users.

These numbers weren’t based on some small sample size, either: Ecosultancy reported this gap based on a two-year-long study where they analyzed 2 million monthly visits to 60 different corporate websites. LinkedIn accounted for nearly two thirds of all social network referrals to corporate homepages in this span, far more than any other social network:

LinkedIn: 64% of social referrals to a company’s website came from LinkedIn

How should you use this information? One thing to consider is to brand your company’s LinkedIn profile like your company’s website. Users who visit both get a consistent brand image across both websites. 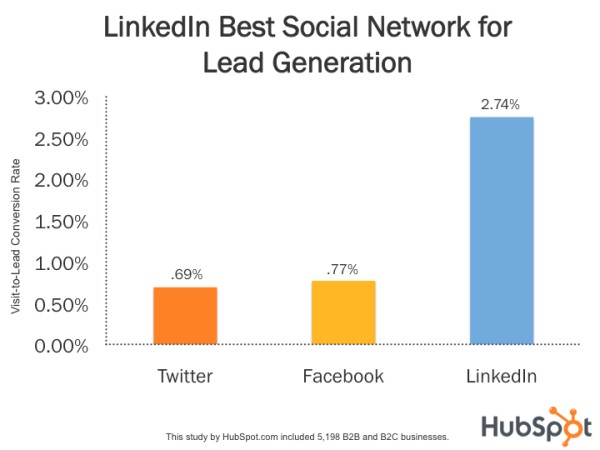 LinkedIn has the highest visitor-to-lead conversion rate among all social platforms. Nearly 3 out of every 100 visitors to your LinkedIn profile will be converted into leads.

That’s higher than social media’s average conversion rate of 0.98%. What this means for your business is that LinkedIn traffic tends to be highly-targeted and already interested in what your business has to offer. Building an effective lead capture system from your LinkedIn page to your official website will help boost that conversion rate even higher.

Note: Looking for a new job? Triple your interview chances with JobScan. I’ve tried and it really works. Scan your Linkedin now!

LinkedIn Has One of the Lowest Engagement Rates 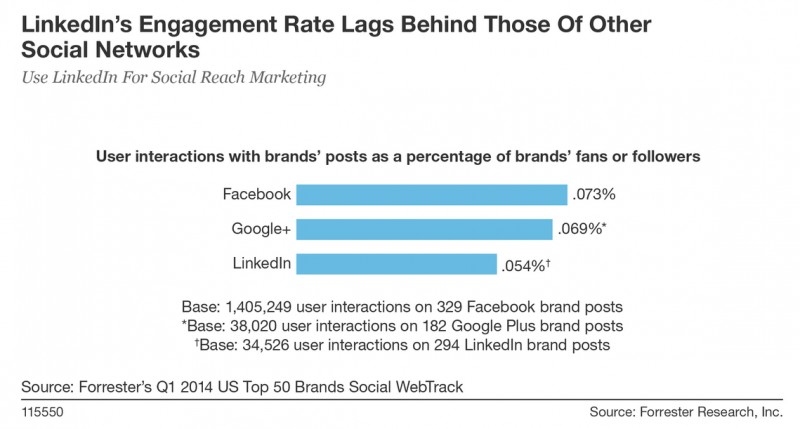 LinkedIn’s engagement rate, according to one study where Forrester analyzed the top 50 global brands’ activities, was rated at just 0.054%. That means out of every 10,000 people who see a post on LinkedIn, only 5 will click, comment, or engage with that post in any way.

That’s why big companies like Coca-Cola – which have over 2 million followers on LinkedIn – will share posts and only get a few thousand likes. There are a lot of people using LinkedIn, but not a lot of people actually interacting with the content they see on LinkedIn.

This rule holds true across every social media platform in the world: content that contains visuals or links gets better engagement. Remember: people are scrolling through their feeds, and your content is one of many shiny objects on that page. If you can make your object shinier and prettier than everything else, you’re going to drive engagement.

This theory is backed up by some genuine LinkedIn science. LinkedIn’s own researchers found that updates containing links get up to 45% higher follower engagement. Meanwhile, images get a whopping 98% more comments.

You’ll Get Twice as Many Interactions by Asking a Question

The same LinkedIn study we linked above revealed how valuable questions can be for engagement. Content updates that asked questions got double the comments of updates without questions.

Of course, every social media intern knows that questions drive engagement. The real trick is to ask the right questions. Too many brands ask questions like “What was your favorite memory about Coca-Cola?” Yes, there are always some people who like to share some stupid story. But most people will just roll their eyes and move past.

The Time People Spend on LinkedIn Continues to Grow

As you might imagine, there are two different types of LinkedIn users: some who check their profile once a week or month for new connections, and others who check LinkedIn daily to interact with brands, comment on industry news, and build new connections.

Since the beginning of time, social networks have always been fueled by younger generations. In the last few years, we’ve seen a huge rise of LinkedIn users among new graduates. Many people believe that LinkedIn’s slow usage rate in the past was due to the fact that internet-savvy, social-media-hungry millennials were still in school. Today, many of them have joined the work force, and they’re building LinkedIn profiles to show off their qualifications.

LinkedIn announced that more than 40 million students and recent college graduates now use the website.

LinkedIn is growing rapidly all over the world. It’s more popular in developed countries, where approximately 1 in 3 people have a LinkedIn profile However, it continues to grow worldwide.

At the time of writing, LinkedIn has 433,000,000+ registered members according to its official counter. Some of the impressive country-by-country breakdowns include:

128 million Americans use LinkedIn (40.1% of the entire population)

12 million Canadians use LinkedIn (34.1% of the entire population)

The UK has 20 million LinkedIn users, Australia has 7 million, and India has 35 million

For a full country-by-country breakdown, check out LinkedIn’s official stats map here. LinkedIn is very popular among the United States, Canada, the UK, Australia, New Zealand, South Africa, and other English-speaking countries, but is under-used in many Asian countries and the Middle East. Less than 1% of the population of Japan, for example, uses LinkedIn. Expect this to change in the future (the site is available in 24different languages already and is growing rapidly in the developing world).

When is the Best Time to Post on LinkedIn?

You can find a number of different statistics telling you the best time to post something on LinkedIn.

Some people believe that the best time to post something on LinkedIn is the so-called social media sweet spot: Monday from 6pm to 9pm, which consistently has the highest engagement across multiple social networks.

Ultimately, the best time to post anything on any social media network varies widely depending on your audience. Gather your own analytics and find the rhythm of your own LinkedIn followers.

Get Employees on Board

Make sure your employees are following your company on LinkedIn. Understandably, they’re 70% more likely to engage with your post (clicking, sharing, or commenting) than a typical LinkedIn user.

When employees follow your company’s page, they also appear as employees on your page – so your future customers or clients can see those employees and put a human face to the name.

LinkedIn is one of the world’s fastest growing – and most popular – social networks. The statistics above show you why you and your company need to start investing time in LinkedIn marketing.


Note: Looking for a new job? Triple your interview chances with JobScan. I’ve tried and it really works. Scan your Linkedin now!

Apurva or "AB" as more widely known has over 5 years of digital marketing and digital branding expertise. He's worked with myriad of fortune 500 brands across multiple verticals notable automotive, healthcare and telecommunications. Apurva is very knowledgeable about various digital channels such as SEO, Social Media marketing and Digital branding! He currently helps manage and strategize for bebusinessed.com which provides users information on various facets of business! The best way to contact Apurva is via his Twitter or LinkedIn accounts!

At BeBusinessed.com, we have resources guides, how-to guides, tutorials, and data driven reviews. Our goal with any review is to combine objective data with subjective opinions. In short, we want to give you the edge you need to be successful.